Ready To Officiate Your Special Day!

Children At (Or In) A Wedding Or Not

Who Conducts The Rehearsal?

One of the things that I frequently see, is arriving to a venue or ceremony site, and the wedding party has no idea who is supposed to conduct the rehearsal.

Ideally, the VENUE should provide a wedding coordinator. Someone that is familiar with the grounds, the standard order of a rehearsal, where everyone will stand, how they will walk for both the processional and recessional, and can help cue everyone when it is their time to proceed.

Unfortunately, venues I am finding, do not always provide this service. It seems to be, that it is becoming more commonplace (unless it is a church), that couples are on their own, in terms of orchestrating the rehearsal.

Officiants should always have knowledge of the official order of the processional and recessional, music cueing, and where everyone should stand and sit. However, this is not the job of the officiant to provide the service. Couples that are having a rehearsal, and particularly a large wedding party, where there is not a wedding coordinator present at the venue, should familiarize themselves with the standard rehearsal process.

With that said, I have conducted many, many rehearsals for couples that wish to leave that aspect to me. There is an additional fee of $50.00 if I am to coordinate the rehearsal vs. just participate in it.

When meeting with your venue, ask them if there will be someone on site the day of the rehearsal to coordinate it.

Wedding Officiating 'land' can be overwhelming to navigate, and to decipher who is the best fit for you as a couple.

Believe me... I understand. With so many choices out there, male or female... how do you know that the officiant you have picked is right for you?

And for the purposes of this blog, why hire me?

First and foremost: with ANY officiant that you pick, they should be able to answer my FAQ's (under the About section of this website). If they cannot answer those questions, I would weigh very heavily if they are the right fit.

Second, and this is often an overlooked part of wedding ceremonies... is you will be guaranteed, that you can hear me. I cannot tell you how many weddings I have attended, where the officiant, AND the couple, could not be heard. Measures were not taken to ensure that the officiant (at least) had a microphone in place. This is frustrating for all guests (especially the elderly)..they want to hear your vows. This is the most important day of your lives. Later, when you view the video, and can barely hear anything, it is frustrating as well- for you. I have my OWN microphone system, and if your venue/DJ does not provide, and the wedding is large enough, that I require one, for a small additional fee, I will transport my system, and rest assured, guests will be able to hear.

Third-I custom design ceremonies. I do not just plug your names into a religious or non-religious template. I take the time to get to know you, and from there, after a series of questions, decipher what you are looking for. In a matter of days, you will receive a draft of the ceremony, so you can review it, approve it, and we can make any necessary changes before the wedding date.

Fourth- I have pictures of former ceremonies. Anyone can get ordained these days, but without pictures to prove their work.. how do you know?

Fifth: I keep up on all state rules/guidelines. For example, I know, that my ordination is not accepted in VA or PA. I will not perform a wedding in those 2 states.

Sixth: I am very open minded.. to any different ideas, or things you want incorporated into the ceremony. For example, I had a couple ask me to dance up the aisle pre-ceremony instead of just walking. No problem!

And finally, I am reasonably priced. This is a loose term.. as I have found that some officiants claim to be reasonably priced, but have not taken the time to get to know the market for officiants, nor what a fair price is. I have done the research, and my prices fall right in the average arena of what they should be.

Feel free to contact me with any additional questions, and happy wedding planning!

When to book your officiant

I am often asked when you should book your officiant for your wedding (particularly if it is a big wedding.. big- defined these days, as 75 people or more).

The simple answer to that question, is generally 6-12 months ahead of time. The risk that is run in waiting too long (particularly when the wedding is during peak season: May-October), is that the officiant that you really want, will likely be booked with another wedding, and because most weddings take place on Saturday... inevitably, the times will collide.

During non-peak season, officiants are often available last minute. But if your wedding is during that 6 month stretch of most popular months to get married, make sure that you follow the general rule of thumb:

The first two things to be booked are your venue, and your officiant.

It pains me to have to turn couples away, or refer them to someone else, when I am already booked. I take great pride in my wedding ceremonies, and want to be able to officiate as many weddings as I can.

As always, trying to be helpful :-)

It is a well known fact, that pre-marital counseling is not  a requirement to getting married (unless it is in certain religious institutions).

I too, do not require it by any stretch of the imagination, but I do recommend it.

-we take drivers training to obtain a license to drive.

-We attend college, to obtain advanced degrees to be qualified to do what we choose to do for a living.

-Mothers and Fathers- to- be take Lamaze classes to learn how to birth a baby.

-We take personal interest classes and seminars to learn how to engage in a new skill (s).

-We seek out friends/others for advice on buying homes (particularly if you are a first time home buyer).

And there are many other examples... but my point is this:

When we choose to get married, we are embarking on one of the biggest decisions of our lives. We are saying 'yes, I will agree to living with you, committing to working on this relationship, and staying with you until death do us part'.

Yet, most do not choose to obtain pre-marital counseling to determine if the biggest issues that will come up in the marriage will be solvable.

What makes me unique as a wedding officiant, is that my main hat, is as a psychotherapist and mental health counselor. I do a great deal of pre-marital and marital therapy, and I will openly say, that pre-marital therapy is not a guarantee by any stretch of the imagination that the marriage will last. However, it does give you an initial jump start to discussion on issues that will inevitably come up, and that need to be thought of, and puts you miles ahead of many.

As always: I offer my incentive that if a couple signs on for 8-10 structured pre-marital therapy sessions with me, I will officate their wedding for free.

Included in these sessions are 'hot' topics such as the following:

-Children: to have or not to have

In Michigan and Ohio (at least), peak wedding season is typically May thru October. This 6 month stretch keeps wedding coordinators, officiants, florists, photographers, caterers, and venues quite busy.

Inevitably however, the 'lull' comes upon us-and this is usually November thru April. While business can (and does) definitely slow down here in the midwest, there are ways to keep business fresh, and in preparation for the busy months ahead.

1. Consider offering an incentive for couples to marry during off season months. I for instance, am offering a $50.00 off incentive for all weddings taking place in November-January that book with me.

2. Start taking notes about how you can refresh your website, business ads, cards, etc.

3. Do not lose the momentum. Get out there-shake hands, take other vendors out to lunch/coffee. Attend bridal shows.

4. Work on new material (for officiants). Write new ceremonies, come up with interesting and new ideas.

5. Stay positive, and enjoy the break. The busy months will be here before you know it!

6. Send thank you cards to the couples that you did business with during peak months.

7. Consider doing a community talk about the nature of your business.

8. Pay attention to who is getting engaged around the holidays. This is the most popular time to get engaged-so those are definitely couples to target.

Having a Family Member/Friend Officiate Your Wedding

It can be tempting to ask a friend or family member to become ordained, and officiate a wedding. After all, you may likely have known them for a long time, and feel that they are the best fit for you. I have in fact had couples that have made the decision not to have me officiate their wedding, due to the fact that the friend or family member will officiate the wedding free of charge. I am here to tell you that before you make this decision, carefully weigh out this decision.

This is the most important day of your life. A seasoned officiant knows the ins and outs of advising you on the logistics of your rehearsal and ceremony as well as the design of the text and the ritual itself. The experienced officiant can be a wealth of information and ideas to help you create the ceremony that is perfect for you. They know what works, and what doesn't. Typically officiants like myself have a library of different ceremonies, readings, and specific extra touches to the ceremony that a friend or family member does not have. Furthermore, officiants like myself have had experience with those little mishaps that do in fact happen at times, and know how to roll with it.

If you are wanting a friend or family member to officiate, make sure that they have done their homework, and perhaps even sought out someone like myself to coach them on officiating what very well may be-the first wedding/ biggest speech of their life that they will ever give.

On July 20th, 2015 I had the honor of officiating the wedding of Monica and Bob at this gorgeous house they rented for the week on Lake Huron. It was truly breathtaking. I am more than willing to travel to your locale if it is a destination wedding like theirs. Contact me for rates. There is nothing more calming, peaceful, and serene than a beach wedding! 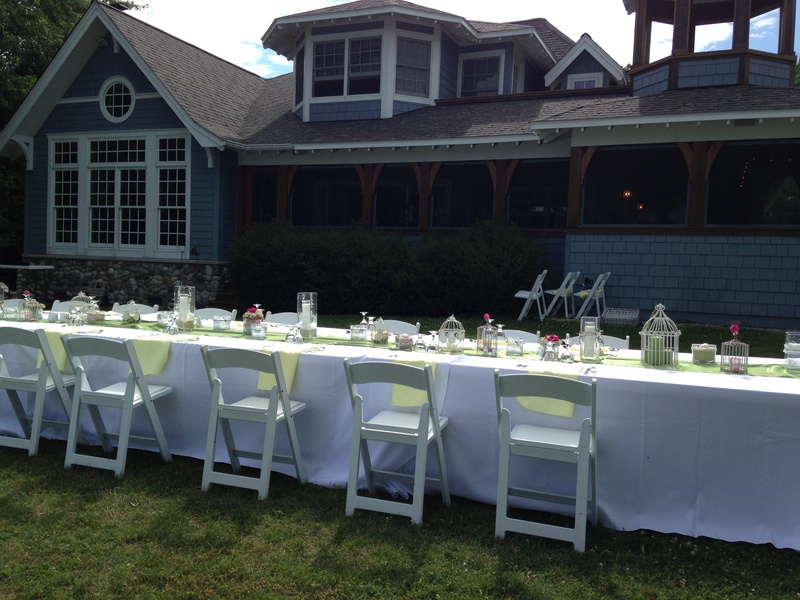 Please contact me today if interested in having me officiate your same sex union. I have done several, and will custom design a ceremony that is unique to your taste and style as a couple.

I am super excited that it is now legal for all!